Create an Account - Increase your productivity, customize your experience, and engage in information you care about.

A year later, the St. Johns supervisor called for the move to his community, providing residents there made a one-and-one-half acre building site available. St. Johns residents raised $2,000 to help with the moving expenses. In December 1857, county offices were moved from Dewitt to Plumstead Hall at the northeast corner of Clinton Avenue and Walker Street in St. Johns.

In 1858, a 20- by 25-foot brick county building was erected on the northeast corner of the public square. County offices were housed there. Courts met at Plumstead Hall on the east side of Clinton Avenue, Newton Hall on East Walker, and the Hicks building on the west side of the second block of Clinton Avenue.

In January 1869, supervisors discussed submitting a $25,000 building proposal to taxpayers. This was later approved 1,734 to 1,170. A building committee composed of William L. Hicks, George R. Hunt, Benjamin F. Shepherd, David Clark, Moses Bartow and John Hicks was appointed and given authority to enter into contracts.

In October, 1869, the committee adopted a plan similar to the Bay City, Michigan courthouse designed by Oliver Hidden. Foundation work contracts were awarded. The cornerstone laid in the fall of 1869, and the foundation was completed the next month.

On March 15, 1871 the courthouse dome was struck by lightening, tearing out the southeast corner completely and destroying all of the glass. Damage was estimated to be between $250 and $500.

The Committee's final report was issued on January 8, 1872: The whole amount appropriated for building a Court House was $36,000 as follows:
Information Courtesy of the Clinton County Historical Society. 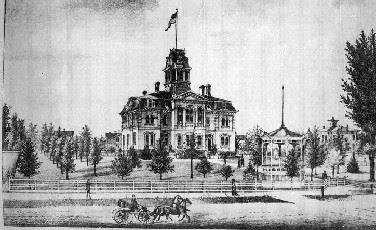 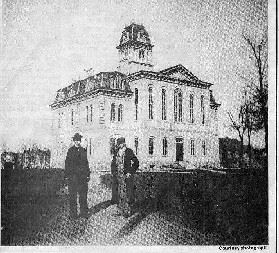 Online Services
Meeting Agendas/Minutes
Employment
Notify Me®
Connect With Us